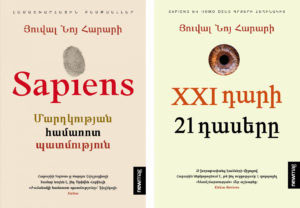 The international bestseller, 21 Lessons for the 21st Century, has been translated into Armenian. The book by the world-famous scientist is presented to the Armenian readership by Newmag Publishing House in partnership with Galaxy Group of Companies. In the summer of 2020, Harari’s Sapiens: A Brief History of Humankind book was released, which received a great reception from the Armenian readers and was sold out in all bookstores shortly after its release. In the second book, the author raises the issues of technological progress and value crisis. Gurgen Khachatryan, co-founder of Galaxy Group of Companies and Chairman of the Board of Directors at Ucom, wrote a special foreword for the Armenian edition of the book.

“When you graduate from university, your profession might no longer be relevant. While you are asleep, artificial intelligence processes your data to target you better. How are we going to survive in this rapidly evolving, questionable world where old models have already collapsed and new ones have not yet been built? Have we learned the lessons of the 21st century or had the courage to even face them head on? This book touches upon the successes and failures of humanity, approaching the accepted truths from an opposite, often unexpected and sobering point of view,” Gurgen Khachatryan wrote.

The book’s editor, Tatevik Nalbandyan, notes that through his work 21 Lessons for the 21st Century the historian makes us think about values and meanings; understand what our mission is in a world filled with info-noise and uncertainty. In the 21 chapters, which both provoke rebellion and give food for thought, the scientist touches upon many problems. In this book, Harari focuses on the present, trying to understand what is happening here and now. What are the biggest challenges and opportunities today? What should we pay attention to? What should we teach our children?

“The book tries to cover issues of global importance—which will have an impact on the future of our planet—from different standpoints, without the ambition to present a comprehensive picture of reality. Why is liberal democracy in crisis? Is religious consciousness returning? Is a new world war expected? Which civilization rules the world: Western, Chinese or Islamic? These are some of the 21 important questions that the author ponders on, urging the readers not to be indifferent to the debate about the future of humanity,” said the translator of the book, Liana Zakaryan.

Harrari, who is one of the most influential scientists of the 21st century, is convinced that globalization is pressuring our personal behavior and moral principles. We are all entangled in a single large web, which on the one hand restricts our movements while on the other hand transmits even our smallest fluctuations far away. Read our current 21 most important questions and their thorough answers in 21 Lessons for the 21st Century.